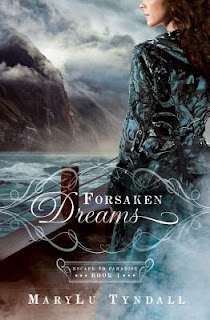 Embark on a seafaring adventure in a brand-new series from bestselling author MaryLu Tyndall. After witnessing the death and destruction caused by the Civil War, Colonel Blake Wallace is eager to leave his once precious Southern homeland for the pristine shores of Brazil and the prospect of a new Utopian community. Widow Eliza Crawford seeks passage on Wallace’s ship harboring a dirty secret—and a blossoming hope for a fresh start. But will dangers from the sea and from man keep them from the peace and love they long for?


It took reading 39% of the book for me to really become hooked on it. From that point until I finished it, I could not put it down. Fascinating story, I've been looking forward to this series since reading about it on MaryLu's blog awhile back. The characters and the storyline do not disappoint, I would rate both of those 5 stars.

I am rating the book as a whole as a 4 star book however. There were a couple of, what I felt were historical errors, in the book. in an early chapter of the book, a character stated he'd been in a battle in '84. As the Civil War took place between 1861 and 1865, I did feel this was likely a typo. Also, Eliza's (the main female character) father was stated to have worked for President Jefferson Smith. My assumption is the author was referring to the President of the Confederacy, who was Jefferson Davis, not Jefferson Smith. Although neither of these issues stopped me from completing the book, they did impede my enjoyment of it.

I liked the secondary characters and hopefully will see their stories continue in subsequent books in the series.

Hello everyone, it seems that I have taken a bit of a hiatus from blogging, however that is about to change. I am planning to start posting new reviews very, very soon.
Posted by Michelle at 1:50 AM 1 comment:

The Lady of Bolton Hill by Elizabeth Camden

From the back cover:

When Clara Endicott and Daniel Tremain's worlds collide after twelve years apart, the spark that was once between them immediately reignites into a romance neither of them thought possible.

But time has changed them both.

Daniel is an industrial titan with powerful enemies. Clara is an idealistic journalist determined to defend underprivileged workers.

Can they withstand the cost of their convictions while their hearts --and lives-- hang in the balance?

I was completely captivated by The Lady of Bolton Hill. It stands as one of my favorite books of the year, thus far. I must say I love the Gilded Age, and I am very pleased to find more books are being set during this time.

Both Clara and Daniel are wonderful characters, and their story has several star-crossed qualities. Clara being from the upper class, while Daniel being from the working class. As a reader, I find myself drawn to the heroes, and Daniel Tremain is one I will not soon forget.

I also loved the secondary characters. I found Clara's brother, Clyde, to be quite interesting. It was intriguing how the siblings choose different areas to service. Clyde with his work among the Navajo, and Clara with her muckraking articles. And what can I say about Bane, without giving away a major plot point. I can only say I found him completely fascinating, and would love to see his story further explored.

The Lady of Bolton Hill is a book that has stayed in my mind long since I finished reading the last word. I look forward to reading other books by Ms. Camden.

**Many thanks to the Bethany House publishers for the review copy.**
Posted by Michelle at 1:11 PM 2 comments:

To Win Her Heart by Karen Witemeyer

From the back cover:

Do they have a fighting chance at love?

After completing his sentence for the unintentional crime that derailed his youthful plans for fame and fortune, Levi Grant looks to start over in the town of Spencer, Texas. Spencer needs a blacksmith, a trade Levi learned at his father's knee, and he needs a place where no one knows his past.

Eden Spencer has sworn off men, choosing instead to devote her time to the lending library she runs in the town her father founded. When a mountain-sized stranger walks through her door and asks to borrow a book, she's reluctant to trust him. Yet as the mysteries of the town's new blacksmith unfold, Eden discovers hidden depths in him that tempt her heart.

Eden believes she's finally found a man of honor and integrity. But when the truth about Levi's prodigal past comes to light, can this tarnished hero find a way to win back the librarian's affections?

I cannot begin to say how much I loved To Win Her Heart. Karen Witemeyer is quickly becoming one of my favorite authors. Her characters are deep, and frankly unlike many in Christian fiction today.

I adored the relationship between Levi and Eden. The pasts of both characters were fascinating, and I especially loved Eden's character growth throughout the book. The supporting characters were rich as well. Honestly, I'd love to see Chloe and Duncan's story explored further. I loved them, and the way Chloe saw everything.

As for the villain, I simply must say Sheriff Pratt was aptly named. I cringed just about every time he was in a scene.

Levi's speech impediment was superbly handled. As someone who had a speech impediment as a child, I found his searching for the right word, and reluctance to say the sounds he found problematic to be touching. I loved his eloquence with written language though.

I could not put To Win Her Heart down, and I highly recommend it.
Posted by Michelle at 6:01 PM 5 comments:

Against the Wind by Brock and Bodie Thoene

As Nazi forces tighten their net of evil over Europe in 1940, famed Jewish concert violist Elisa Lindheim Murphy escapes from Vienna to England. But both Elisa and her American newsman husband, John Murphy, are convinced that nowhere in Europe is safe from Hitler's seemingly unstoppable forces.

As Nazi U-boats patrol and sink Allied vessels in the North Atlantic, Elisa makes a desperate but brave decision—to accompany Jewish refugee children on a civilian transport through treacherous seas to seek asylum in America. At least there, in the land of freedom, the ragged remnant of the Jewish people can live on in peace and safety—or so she hopes. But as German torpedoes streak toward the refugee ship, Elisa will face the greatest trial of her life….

I would probably rate this about 3.5 stars.

My thoughts on Against the Wind are so jumbled right now. I loved the Zion Covenant series, it has a permanent place on my keeper shelves. Elisa and Murphy are two of my all time favorite characters, and one of my favorite couples.

I loved the first third or so of Against the Wind. There were moments that made me gasp, and it was wonderful to reacquaint myself with Elisa and Murphy. However once I was at the point where Elisa boarded the ship for America I found myself scanning through the pages.

My biggest issue with Against the Wind came from Elisa's diary. This diary covered the story of Vienna Prelude, and I felt there were serious continuity errors within the diary sections. Events were changed from how they occurred in Vienna Prelude, and there was one section of the diary where the dates used did not make sense at all.

I do wish to compliment Summerside Press on the cover art. The photos of Elisa and Murphy are pretty much the way I have always pictured them in my mind.
Posted by Michelle at 10:32 PM No comments:

Non-fiction: Curiosities of the Civil War

There were plenty of times I was laughing as I was reading the book. The chapters I enjoyed the most were “Famous – Or Soon to Be.” This chapter read like a who's who in the Civil War. It was fascinating to read the rest of the story behind these people. Another chapter, I enjoyed was “The Names were Changed,” which was people who had changed their names. Many of these were foreign born soldiers who sought to Anglicanize their names.

I would recommend Curiosities of the Civil War to anyone who enjoys history or is a Civil War buff.

I received this book free of charge from BookSneeze, in exchange for my honest opinion. Views expressed are mine, and I am receiving no compensation, nor was I required to write a positive review. I am disclosing this in accordance with FTC regulations.

In case you are wondering, the photo is of French skater, Florent Amodio who recently won the European Championship. He won the title on the strength of his short program, so that is the program I am going to link.

This is either Italian or Spanish television, no subtitles this time.

The silver medalist was another French skater, Brian Joubert, who actually won the freeskate. Joubert is trying new music this year, Beethoven.

The bronze medalist was Thomas Verner of the Czech Republic.


Now, on to U.S. Nationals. The favorites coming in, Jeremy Abbott and Adam Rippon are better covered on the agony of defeat side, so I will write about them later. There were several very good stories to come out of U.S. Nationals though.

With the veterans faltering, the next generation of skaters really stepped up. The first one (shown on NBC) was Richard Dornbush, who is the current Jr. Grand Prix champion. His program was my favorite of the ones shown on NBC.

(Also, if you watch the video, you will hear that Adam Rippon skated an outstanding program, his freeskate was outstanding. However his short program was not)

The next skater, I wish to highlight is Ross Miner. I was quite surprised by how much I liked this program. I had watched a video of it from a summer competition, and had not liked the program at all. But in late January, I loved it.


The night belonged to one of the veterans though, Ryan Bradley. Last year, he was fourth at Nationals, therefore missing out on the Olympics, and had decided not to compete anymore. After a twitter campaign from his fans, he decided to compete at Nationals. I'm posting both his short programs and free skates.

The skate of the night though, didn't come from a medalist, or a well know skater. It was from a 16 year old, competing in his first senior nationals. Enjoy the freeskate of Jason Brown, and I think his is a name you should remember in the future.